Why was 2018 a landmark year for Cloud computing? And what’s next on the horizon?

By: Terri Schlosser | 8,011 views
Share with friends and colleagues on social media

Let me start with an obvious statement: cloud computing is continuing to grow – and really fast. That’s hardly headline news anymore. “Cloud” has been around for nearly 20 years now and it’s a constant theme within the IT industry.

A big year for cloud

So, why was last year such a standout year for cloud computing? Because for the first time, spending on cloud IT infrastructure overtook what was spent on traditional IT infrastructure. According to a recent report from IDC, that major milestone was passed in the third quarter of 2018, when vendor revenues from sales of servers, storage and networking for cloud environments hit $16.8 billion for the quarter, accounting for 50.9 percent of the worldwide total. 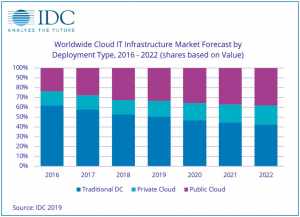 There’s no doubt that cloud growth has been impressive. When the full 2018 numbers are finally in, IDC predicts annual spending on public cloud infrastructure will have grown at an annual rate of 44.7 percent, with private cloud infrastructure investments rising by 23.3 percent. More than ever, there’s an appetite for the agility, innovation, speed of execution and improved customer experience that cloud solutions offer.

What made 2018 such an exceptional year? IDC suggests it was partly down to the number of new public cloud data centers built and opened during the year, but there were also technology refresh cycles that helped fuel spending and investments.

Steady growth for traditional IT

All this cloud infrastructure growth doesn’t mean that traditional IT is dead and buried. In fact, it is far from it! Traditional (non-cloud) IT infrastructure investment is still growing too, albeit at a more modest estimate of 12.3 percent for the year. Right now, it still represents roughly half of all IT infrastructure spend. Despite estimates suggesting a third of all IT departments are under pressure to migrate all applications to the cloud[1], that doesn’t look likely to happen anytime soon. By 2022, traditional data centers will still account for over 42 percent of IT infrastructure budgets.

Pragmatic businesses often have existing IT investments to protect and may have specific security, governance and performance requirements to manage. For them, a multimodal approach may be the way to go.

What should we expect in 2019 and beyond

On the surface, the answer appears obvious: more cloud infrastructure growth.  While that’s true, we may see some slowdown in the short term, especially after such strong growth in 2018. But beyond that, expect big things. Again, according to IDC, by 2028 cloud is expected to account for 80 percent or more of all IT spending.

What’s driving this rush to the cloud? Frankly, there are serious business imperatives involved. Almost every organization I talk to is trying to improve customer experience, lower costs, improve efficiency and adapt faster than their competitors. Virtually all the technology trends that help deliver on those priorities are in some way tied to IT transformation and private, public or multi/hybrid cloud solutions.

And one other thing to note.

Open source software is becoming increasingly prominent when it comes to cloud-oriented platforms, applications and tools. It’s also at the spearhead of all of the latest and most important technology trends. More and more vendors, businesses and organizations are embracing the open source model as the best approach for delivering the agility and innovation they need.

In my opinion, 2018 was the hottest year yet for open source software and there seems little doubt that it will continue to gain momentum in the months and years ahead.

Share with friends and colleagues on social media
(Visited 1 times, 1 visits today)
Tags: Cloud, digital transformation, IT Transformation, Open Source, OpenStack
Category: Cloud and as a Service Solutions, Cloud Computing, Digital Transformation, Expert Views
This entry was posted Thursday, 31 January, 2019 at 1:00 pm
You can follow any responses to this entry via RSS.